COMPASSION: LIGHTING THE PATHWAYS OF THE GOSPEL

The fate of the leper is clear. Not only does he have a terrible affliction of the body, he is now excluded from the life of the community. The Leper is a powerful symbol of those who are beyond help or hope. But this one has heard about Jesus and His power to heal the sick. More importantly, Jesus has a reputation for including those who have been excluded. This reputation empowers the leper to come forward, even if he is still unsure if Jesus wants to heal him. Jesus’ Compassion for all who are isolated moves Him to reach out and touch the leper. Healing him and welcoming him back to his community, with one gentle touch, are movements of the same dance.

The leper gets what he asked for but Jesus does not. Jesus asks him to show himself to the priest and make the ritual offering for his healing – all signs that he has been restored to community. Mark does not tell us if he does this but he certainly ignores the request to keep his mouth shut. He tells everyone everything and, as a result, Jesus is now the one who is isolated. This is the price he pays for being Compassionate. There is always a price!

Listen to this poem, ‘A Prayer to the Pain of Jesus’.

When crutches were thrown away 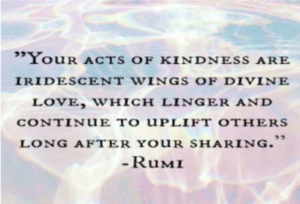 Did Jesus limp after the running crippled?

Did His eyes dim when Bartimaeus saw?

Did life ebb in Him when it flowed in Lazarus?

When lepers leapt in new flesh
Did scales appear on the back of His hand?

The Gospels say Jesus felt power go out from Him
but neglect to say whether, at that moment, pain came in.

Did the Son of God take on ungrown legs and dead eyes
in the terrifying knowledge that pain does not go away,
only moves on?
(The Hour of the Unexpected. John Shea 1992)

The art of Compassion is experiencing ourselves to be the same as the person who is before us and accepting the cost of making a relationship with them. When this awareness of sameness and connection
replaces separation, Compassion arises. It is the certainty that we share the same world that drives us towards action. We do not recoil, we reach out. Compassion is the engine that drives us forward in the same way that it made Jesus touch the leper and make him clean. It is also the unwavering certainty that sits behind the words of Jesus when the leper asks if Jesus wants to heal him, “Of course, I want to…”

Poem number two, ‘Why aren’t We Screaming Drunks?’ By Hafiz.

The sun once glimpsed God’s true nature and has never been the same.
Thus that radiant sphere constantly pours its energy upon this earth,
As He does from behind the veil.

With a wonderful God like that, why isn’t everyone a screaming drunk?

Hafiz’s guess is this.

Any thought that you are better or less
Than another person
Quickly
Breaks the wine Glass. (The Gift:Poems by the great Sufi Mystic. 1999)

This website uses cookies to improve your experience while you navigate through the website. Out of these, the cookies that are categorized as necessary are stored on your browser as they are essential for the working of basic functionalities of the website. We also use third-party cookies that help us analyze and understand how you use this website. These cookies will be stored in your browser only with your consent. You also have the option to opt-out of these cookies. But opting out of some of these cookies may affect your browsing experience.
Necessary Always Enabled

Any cookies that may not be particularly necessary for the website to function and is used specifically to collect user personal data via analytics, ads, other embedded contents are termed as non-necessary cookies. It is mandatory to procure user consent prior to running these cookies on your website.