THE DIGNITY OF SERVICE

The word is out. Jesus is a healer who banishes illness and inner torment. So, the moment the sun has set and strange sabbath rules no longer apply, they come to Him, bringing their sick in droves. It must have been a great evening for everyone. They are witnesses to how healing unbreaks the broken circles of love and restores lives and communities. Yet, in the Gospel, these cures are recorded but they are not embellished in any way. Even the ‘demons’ are not allowed to speak. If they are heard, Jesus will be misunderstood. He silences the ‘demons’ because He knows their half-truth is more dangerous than a lie.

The real Mission is unfolding, and Jesus has to stay close to the One who has sent him. He seeks out the desert and prayerful communion with His Abba. Here, he enjoys clarity and sees the right direction He needs to take. Jesus has to choose, and prayer will centre Him for those decisions. He cannot afford to be distracted by ‘popularity’. His cures and exorcisms are magnets that draw large crowds. To His ‘not yet fully trained disciples’, crowds spell success. Fame and reputation are still a big temptation for them. Jesus calls followers but He does not court fans. The message is more important than the miracles. This is why He came. His identity, claimed and reclaimed in prayer, draws Him away from the crowds who seek Him. He must move on. The message, the spiritual revolution must be preached and taught in word and deed.

Ram Dass, a spiritual teacher in the Hindu tradition, suffered a severe stroke in 1977. In his wonderful book, ‘Still Here: Embracing Aging, Changing and Dying’, he wrote, “While cures aim at returning our bodies to what they were in the past, healing uses what is present to move us more deeply into soul awareness, and in some cases, physical improvement. Although I have not been cured of the effects of my stroke, I have certainly undergone profound healings of mind and heart”. (p.67). For Ram, it is in the sickness that the healing begins.

And in his poem, ‘Fever’, John Updike speaks about the inner healing that came from his illness.
I have brought back a good message from the land of 102 degrees:
God exists.
I had seriously doubted this before;
but the bedposts spoke of it with utmost confidence,
the thread of my blanket took it for granted. (Collected Poems 1953-1993) p.28 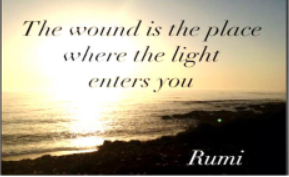 Again, some patients have reported a greater sense of being alive and closer to others when they were sick. This was the case for Fred who was diagnosed with terminal cancer. After an initial period of distress something amazing happened to him. He just stopped doing everything that didn’t really matter. His terminally ill life had become vital and peaceful. When the doctor called to tell him they had made a mistake he was shattered. “When I heard this over the phone, I cried like a baby – because I was afraid my life would go back to the way it used to be”.

(Presence: Human Purpose and the Field of the Future, pp25-26)

This is the challenge the Gospel presents. Cures are a sign of the Kingdom of God. Like illness, they should be received as a gift and both should carry us to the new humanity. This is why Simon’s mother-in-law is both cured and healed. The touch of Jesus is a transfusion. His life flows into her life. In loving the person, hidden at the centre of an illness, He lifts her up. The fever leaves and service begins. God’s service to her becomes her service of others. This healing reconnects her to the true meaning of her life. The flow of life and love through her intimate communion with God, herself and her community results in the Dignity of Service. And the Gospels are clear that service is not menial work. It is the hallmark of the new humanity that Jesus, the Beloved Son of God came to establish. After all, He Himself came not to be served but to serve and give His life as a ransom for many. (Mark 10.45) What about us?

This website uses cookies to improve your experience while you navigate through the website. Out of these, the cookies that are categorized as necessary are stored on your browser as they are essential for the working of basic functionalities of the website. We also use third-party cookies that help us analyze and understand how you use this website. These cookies will be stored in your browser only with your consent. You also have the option to opt-out of these cookies. But opting out of some of these cookies may affect your browsing experience.
Necessary Always Enabled

Any cookies that may not be particularly necessary for the website to function and is used specifically to collect user personal data via analytics, ads, other embedded contents are termed as non-necessary cookies. It is mandatory to procure user consent prior to running these cookies on your website.